Batter Up! is the first episode of Season 1 of the Lalaloopsy™ TV Series.

Berry wants to break a record for the biggest stack of pancakes, but it eventually becomes too hard for her.

One day in Berry's kitchen, Bea is counting the amount of blueberries Berry is putting in her pancake. Once they reach two-hundred berries, Bea tells Berry that she broke the record for the most blueberries in a pancake, then suggests that they should break the record for the tallest stack of pancakes, which is three hundred seventy-five feet and two inches. Berry is convinced that this wont be a problem but she doesn't actually know how tall this is, so they go outside and Bea shows her.

While she does, Jewel, Crumbs, and Peanut come by and invite Berry and Bea to their picnic. Berry refuses and explains that she has decided to attempt breaking a new record. By then, Owl has reached the target height and Bea presses a button on the tape measure to get him to stop. Owl then marks it by tying it around a really tall branch and flies back down.

Despite the intimidating height, Berry is very confident and she refuses any help from the others when they offer, saying that she's sure she can do it on her own. Even after Crumbs points out that it would be a lot of work for just one person. With this being said, Crumbs, Jewel, and Peanut take their leave as they wish her luck.

Bea says the pancake stack was built in one day, so Berry has to finish hers by sundown. Berry and Bea rush into the kitchen to start. As Berry makes sure she has all the ingredients, she spots Mouse and tells him to leave before mixing all of the ingredients.

At the picnic, Jewel says that the forks need to be to the left and the cups to the right. To fix them, Peanut juggles the plates, cups, and forks until properly placed. Crumbs notices Mouse is gone and shows confusing, saying that Mouse would never miss a picnic. They are joined by Beaver and Forest, who has a wagon of barrels with him. Jewel asks of the contents, but he shows the girls that he is using them to collect syrup. Crumbs asks if he knows where Mouse is, but he does not, but if he sees him he will send him in their direction. 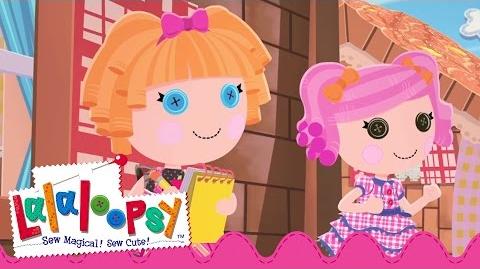