Blossom's Rare Plant is the twentieth episode of Season 1 of the Lalaloopsy™ TV Series.

Blossom tends to a special plant that has a very short life cycle. Peanut tries to get Jewel, Pickles and Patch to be acrobats in her show, but they help Blossom with her Una Dia plant instead.

One beautiful sunny day in Lalaloopsy Land, Blossom Flowerpot was walking on the path when she and Butterfly notice the Honey Cup Flowers are thirsty. So she waters the flowers then she notice the Button Bushes aren't getting any sunlight because the lollipops are blocking the sunlight. So she moves then and Button Bushes got lots of sunlight. As Blossom continuing skipping along the path, she notices something. She got excited when she founds out the flower she found is called a Una Dia Plant. The Una Dia plant only last for one day, blooms with pretty flowers and then withers away. This is Blossom's only chance to watch it bloom and since there are to many weeds, she's going to take the Una Dia to her garden.

Meanwhile at Peanut Big Top's circus, she was finishing the touches on the flinging circus ring. She said that she's going to build a whole new act around it starring Elephant! Peanut then said that the best part is that Elephant don't have to do nothing because once they sway to their highest height, she will let go of Elephant. Then he will soar through the ring then someone will catch him on the other trapeze. But there was no other acrobat and Elephant was about to land on the platform and Peanut rescued him just in time and she needs to find somebody to be in her act. So she sets of to ask one of her friends to be a volunteer.

The Una Dia started to grow taller after Blossom was talking to it. She put it on the sunniest spot in the garden. But when she goes to get some fertilizer, the plant drop to the ground and she thought it had too much sun and put in the shade. The plant drop again and Blossom need to find a way to keep it alive for 24 hours. Then Butterfly suggests they go to Bea Spells A-Lot's house for help.

Bea had books about rare plants, really rare plants, really really rare plants and how to make flare pants and wonder how did that book got there. Then Owl brought in the right book called "Really Really Really Rare Plants." The plant started to grow when Bea started reading and Blossom walking with it. Since the Una Dia like it when Bea reads about itself and Blossom hold it and walk around, Blossom arrives Bea to walk with her while she reads to help the Una Dia stay healthy.

Meanwhile, Peanut was walking looking for someone to catch Elephant on other trapeze and saw Jewel Sparkles and Cat walking on the path to. When Peanut ask her friend if she would like to be part of the act, Jewel ask will she get to wear a sparkly costume, a tiara. and she want a top billing on the poster, "The Swinging Flinging Ring starring Jewel, Cat and Elephant." and Peanut says yes. Since Jewel was on her way home to polish her tiaras, she'll do it after she's done. As she spins around, Blossom bumps into her and Jewel says "Ooh!" which causes the Una Dia to grow more. Blossom asked Jewel if she'll come with her and Bea to help the Una Dia grow by twirling & ooh-ing. Peanut tells Jewel she can help Blossom's plant grow since it's more important since it only last for one day and goes off to find another volunteer. 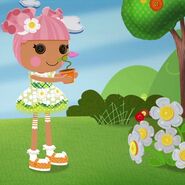 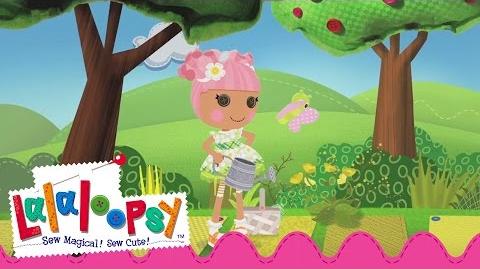