By the Book is the fifth episode of Season 2 of the Lalaloopsy™ TV Series. It is the thirty-first episode overall.

Bea, Prairie, Peanut, Pickles, and Crumbs try to recreate and experience a Wild West book, but they end up "writing" a whole new story. Ace builds a clown car for Elephant.

The episode starts off at Bea's house, where she is reading a Wild West book called The Rip-Roaring Adventures of Bella Star and the Curly Kid. It's so exciting that Bea reads it again. She visualizes herself as Bella Star, the title character, Curly Kid, the sidekick as Prairie and the cattle rustler, Dastardly Delilah as Crumbs. Sitting on a log, Bea wishes she could be a cowgirl like Bella Star, so she seeks advice from Prairie.

Bea thinks she read the book, since Prairie is a cowgirl, but she hasn't. Bea explains that she would like to recreate the book and Prairie accepts. Bea says she'll be Bella Star and Prairie will be the Curly Kid, and Cactus and Owl can be the cattle. With that said, they start the journey.

At Peanut's house, she is putting a clown nose on Elephant and explains it's part of a surprise, his own clown car! Peanut wants him to take a ride, but he's too big to fit inside. When she succeeds, Elephant is squished. Peanut then reminds him to wear a seatbelt. Before Peanut can teach him how to drive it, he doesn't pay attention and drives away instead. He drives like crazy and then crashes into a bush. Peanut says Elephant needs help.

Bea says she needs a hat and lasso so she can emulate Bella. Prairie pulls a hat and lasso out of her pack. Bea tries to lasso but ties herself up. There's no time to learn how to lasso, and Dastardly Delilah is hot on their tail. Since Prairie doesn't see any villains, Bea says that they will have to find one.

Peanut later goes to Ace to ask him to make the car easier for Elephant to drive. Ace says yes and tells Monkey to get the tool box.

Meanwhile, Prairie and Bea go to Crumbs' house, and she says she'll bake treats for the cattle ride. Then, Bea tells Crumbs that she can play Delilah. When Crumbs asks what does she do, Bea demonstrates by putting on a black hat, cape, and mustache, then doing Delilah's evil laugh. But when Crumbs tries to do the evil laugh, it doesn't sound villainous at all. Bea tells Crumbs she has to steal the cattle while Bella and Curly aren't looking, and she tells her about the big showdown. Crumbs then offers to bring treats during the showdown.

Next the girls need is a covered wagon for all their supplies. So they went to Peanut's circus to get one, but it's not covered like Bella's wagon. Peanut use a purple cover to covered the wagon and it looks just like the one in the book. Just then, Pickles BLT and Hot Dog arrives to give Elephant & Peanut their pickle shakes and pickle burgers they ordered. Peanut ask does it come with a side of pickles and Pickles said yes. Now all Bea need are horses, but the hobbyhorses are the only one Prairie has. Luckily she has a great idea. The girls had Pickles and Peanut under a blanket with the hobbyhorse head and a mop for the tail. and they tried galloping.

Bea shows Crumbs the pickle of four cactus peak on the map where the she'll steal the cattle. Then she tells Crumbs not to forget Delilah's evil laugh and she giggles. Bea tells Crumbs to work on it and she says "Bye Bye and "See you all at Four Cactus Peak. Bea reminds Crumbs that she's dastardly.

Bea tries to hop on the horse, but the blanket flops over. Prairie suggests they should walk, but Cowgirl Bea says that Bella Star would never go anywhere without a horse to ride on. So Pickles use her roller skates and pulls the cattle while Cowgirl Bea tries to get the pets to come along by saying "Yah Yah! and Get Along Little Doggie!" But the animals just stand there, so Cowgirl Bea whistles and tells them to follow her and so they did.

Meanwhile, Ace had already taken all the pieces out of Elephant's car and had to figure out a way for him to drive more easier. Until an idea thought into his head. He was thinking about building a remote control.

The girls were riding across the dessert and Bea feels just like Bella Star. They had made it to the river and Bea says they could make daring river crossing like in the story, but Prairie wonders how can they do it.

Ace had finished building the remote control for Elephant's car, but Monkey ask him about the leftover pieces. Ace said they don't need it now that he build the remote control and had Monkey to climb inside. When he pulled the joystick forward, a ejector seat pop Monkey out of the car until he landed in a tree and Ace went back to work.

Meanwhile, the deputies had arrived at four cactus peek, but Prairie sees three of them. So her cacti filled in the place and Cowgirl Bea says that Dastardly Delilah is lurking about. Then they heard Crumbs called out, "Yoo hoo, it's me Crumbs! I mean Dastardly Delilah! Hee Hee Hee!" Prairie says the Crumbs still had to practice her evil laugh. When Cowgirl Bea says that they had the hide the cattle before she gets here, Peanut suggest they can hide in the Chuck wagon and Bea loves that idea.

Crumbs and her pet mouse who was wearing a hat and mustache pop out of the cacti and Cowgirl Bea says "Don't come near my cattle Dastardly Delilah! You better get while the getting is good!" Then Crumbs thinks it's a inconvenient time to take the cattle and she can come back. Bea says that's what Bella Star says and Crumbs brought snacks for the cowpokes and everyone and the animals but Cowgirl Bea rush over and ate the treats. Crumbs asks Cowgirl Bea when she should leave with the cattle and Bea says whenever she's done with the snack break. The cattle hoped on the wagon and they waved goodbye with Crumbs and off she went. Prairie says they should count to 100 and give her a head start.

Ace had just finished working on Elephant's clown car and is about to give it one more test. Monkey who got pillows on his sides and a helmet on is about to hop on the car, but Ace said since Elephant's clown car worked on remote control, she doesn't had to go on the driver seat and was relieved. Monkey hid behind the toolbox and Ace moved the joystick and the car finally worked well and earned a cold drink for a break. Ace had Monkey to put the remote someplace for safekeeping and she put it in the car.

Crumbs and the cattle arrived at her house and since the animals had a long day, they earned some treats and chill out on some pillows. Crumbs gave them some drinks but Cactus doesn't need much water so Mouse drank it up for him. Then Crumbs said that a dastardly character should be good hostess and the pets agreed.

Meanwhile, the Cowgirls were getting closer to their cattle and Curly Kid spotted Crumbs and cattle to boot. Crumbs calls out and asked the girls if they want milk and cookies, Cowgirl Bea says not now because their making a plan to distract her and Crumbs wishes them good luck. While Pickles & Peanut distracts Crumbs, Cowgirl Bea and Curly Kid sneaks inside and tries to get the pets to move out. But the pets shake their heads meaning no and Prairie asked if they don't want to spoil Bea's Special Day and they move out. Crumbs appears and Bea shows her in the book that Bella Star uses her rope to trap Dastardly Delilah in her cave. But since their no big rock or cave, Crumbs suggests she crawl under the table so Bea can trap her. After she did, Crumbs says her Dastardly Delilah line, got her evil laugh correctly and gives the girls some cookies for the road.

As the girls walked, they have a long way to go to the range but Curly Kid told Bella she had the map upside down and she says and that could take a long long time. So the animals hoped into elephant's clown car with Monkey on the top and drove off. When the girls figure out the caddie's missing Bea thought that Delilah got them again and that wasn't in the book. Then they saw then in Elephant's clown car. Pickles said she didn't know Elephant can drive, but Peanut says he can't and the girls gotta rescue them.

The cowpokes can't keep up because it was going to fast and ran thorough the tires and the girls dodge them. Ace came outside and ask what's going on and Peanut told him that the clown car is out of control. Ace saw the car drove past and says that Monkey can't handle the remote. Pickles tells Bea she can borrow her skates but Bella never uses them in the book she and Prairie uses them to catch up.

Suddenly, buttons came out of the car, but the girls dodges them. The car ran through the bridge and the pieces came out. The girls uses the lasso and swing over the bridge. Cowgirl Bea has to think what Bella Star would do to stop the car and she got a idea. She uses her trusty cowgirl lasso to grab the car, but it started to tug Cowgirl Bea until she got the rope tied to a tree and the car stopped and Monkey went flying until she landed in front of Ace.

Luckily, the cattle was a okay and Pickles said she never seen anyone roller skate like that before. Even thought it was not the adventure Cowgirl Bea except but she enjoyed it. Prairie loved it to even it didn't play out like in the story and loved to hear it which gives Bea Spells A Lot a idea.

At Bea's school, she showed the Lalaloopsy kids her very own story she wrote chronicling their awesome adventures. Prairie says unique is understatement & everyone laughed. Peanut ask does the book have a tittle and it's called "The Rip-Roaring Tire Rolling Roller Skating Adventures Of Bea, Prairie, Crumbs, Pickles, Peanut and The Pampered Pets!" and the kids and cattle started laughing as the episode ends. 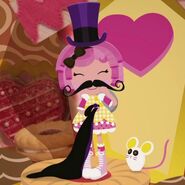 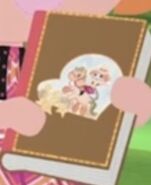 Bella Star in the book

Bella on her Horse

"Allow me to demonstrate."

Bea about to put on the black cape, mustache, and hat on.

One of the storyboards for the episode. 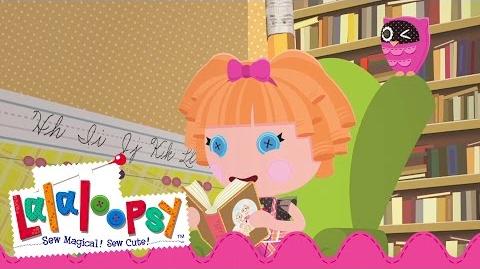 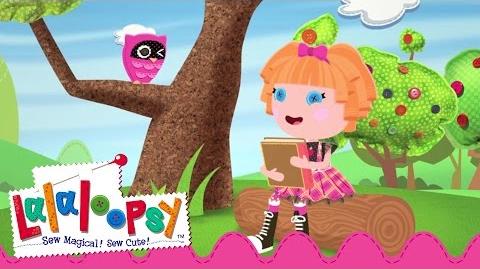 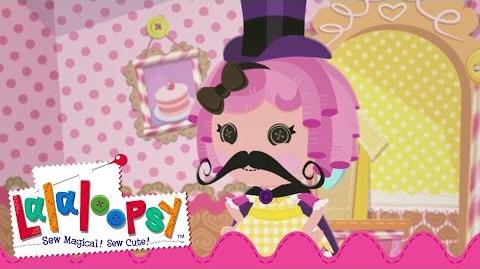