Criss Cross Crisis is the twenty-fifth episode of Season 1 of the Lalaloopsy™ TV Series.

Jewel prepares for the Button Harvest Festival, but the tin can phone lines get tangled up, giving everyone the wrong roles.

The episode starts inside Jewel's house, with her talking to Spot, Pickles, Sunny and Peanut. She talks to them about how they will run the Button Harvest Festival that year. She says that she will give them their assignments for what to do for the festival across the new tin can phone lines. Sunny interrupts by asking why Jewel can't just tell them their assignments at that moment. Jewel tells her that they need to test the phone lines, and she tells Cat to take the girls home for them to wait to be called. Cat takes each Lalaloopsy home and runs into the phone line yarn strings. She tries to resist but can't help playing with the yarn. Cat gets herself tangled in it, then untangles herself with effort. She realizes that the yarn wires got disconnected. Cat reconnects each of the yarn wires, but to the wrong cans. Jewel later calls each of the girls, but she gives them the wrong assignments. 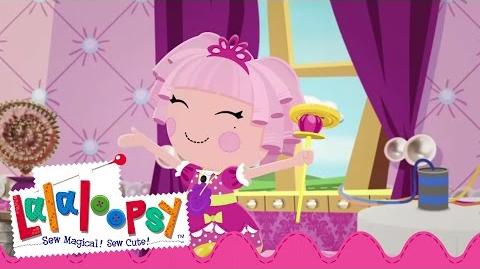