Don't Fence Me In

Don't Fence Me In

Don't Fence Me In is the nineteenth episode of Season 1 of the Lalaloopsy™ TV Series.

Spot makes portraits of her pals and learns to allow her artistic vision to triumph over others' suggestions.

Sunny has been working on a fence in order to keep Cow out from the corn field, as Berry has said that if Cow eats too much corn, she will get a tummy ache. It's then Spot comes along, ready to begin painting the fence and she begins to describe all of the possible choices to paint the fence. Sunny leaves the decision up to her, since she has a bunch of work she has to finish and she leaves to go water her fields of plants. While doing so, Sunny observes how wilted and dried out they all look, which means they will require a lot more water...

Meanwhile, Peanut is trying to think of a good new trick that she can show-off to everyone. Elephant has an idea and does a hand-stand, but Peanut informs him that they have already done this before.

Upon finally settling on a color, Spot begins to paint until she comes across two knot-holes close to each other. She thinks they're too pretty to just paint over so carelessly, and suddenly is hit by inspiration, comparing them to Dot's eyes. Sunny doesn't really understand, but she lets Spot do whatever she wants with the fence. So Spot begins to paint a night time based scene of Dot looking up to the sky, using some tin cans to make a telescope.

While she discusses this visionary piece she has made, Dot happens to be observing the sky at that very moment. Bird happens to see something and points it out to her, so they both leave to go and observe the fence. Sunny still does not understand this picture, so she leaves to resume her work until Dot comes along to compliment the picture. When she's asked how she plans to finish the rest of the fence, Spot is inspired to do a mural portrait of all the other too! With Sunny's permission of course. While trying to decide who to paint next, Zebra points out Peanut, who has accidentally fallen into the nearby water container. Spot is struck by this idea and she asks to borrow Peanut's unicycle to use it for her fence portrait of Peanut. While she doesn't necessarily understand, Peanut grants her use of it anyway and thanks Spot for also inspiring herself before taking her leave!

Later on, Spot attempts to show Sunny her picture of Peanut, but again Sunny just can't see it. However, both she and Dot happen to see something they find flawed and they point it out to Spot, who doesn't agree with them. But with hesitation, she agrees with their changes and begins to make some adjustments...

Sunny is still in the middle of watering all of her tomato plans while Peanut has revealed to Elephant that she's going to be making a water show now. Spot has decided to make Sunny on the fence now and she does it by painting a whole bunch of sugar cubes, since they are sweet and she believe Sunny is too. It makes sense to her, but when she shows the others they only pick out the flaws in how "abstract" it is. It's then Jewel comes along and she explains that since she heard what had been going on, she wanted to help contribute in anyway possible. She criticizes the colors used for Sunny's hair on the portrait, though she does also claim it to be nice.

But eventually, Spot gives up and sits back while everyone proceeds to "fix" her Sunny portrait. But she convinces herself to just be happy since they're all so excited in her project. So she thanks them for all of their suggestions before announcing she will make a portrait of Jewel next. Peanut decides to leave so that she can resume working on her brand new trick. They fill up a lot of water balloons and put them into a cannon, which they then release... only to accidentally send them right back down on top of them!

Spot soon reveals the picture of Jewel she has done and while Cat likes it, nobody else really does. After Jewel points out it doesn't resemble her at all, Spot explains that a portrait actually doesn't need to look like someone. But Jewel complains about this and claims that it would be better if she could actually see herself in it. So Spot grabs a paintbrush and tries to make multiple pictures of Jewel, none of which impress her...

Dot then suggests that to make it easier, Spot could just trace an image of Jewel. She makes her stand in a specific area and with a pink crayon, she traces an outline of Jewel. Jewel is happy with this idea and she tells Spot to color it, and stay in the lines.

Peanut makes a second attempt to launch her water balloons... but once again, it ends with her and Elephant soaked. Now that Spot has finished Jewel's picture, the others kind of want one of each of them too, so they each have her trace their own shadows on the fence until Spot is finally, FINALLY finished. They all adore what she has done, but Spot is less then happy. Jewel reminds her that she has to put her signature somewhere on the fence, but this makes Spot  runs off. Much to their surprise.

While they all think the portraits look better, they slowly begin to realize how they upset Spot. They kept making their own changes to it and didn't realize they were just making her unhappy until now...

Once again, Peanut launches a whole mass of balloons to an unknown location. The water happens to leak out of the tops of the balloons, which water a lot of the tomato plants. Sunny takes a great notice in this when Chick points out the miserable Spot nearby. She approaches to talk to her and Spot explains what she did and how badly she feels. In hopes of cheering her up, Sunny offers to repaint over the entire tense to let Spot just do what she had wanted, but Spot tells her she doesn't have anymore inspiration in her at the time...

That is, until the water balloons suddenly collide with the fence!

Jewel attempts to cover the now smeared artwork, worried about how sad Spot may feel. But Spot is actually really happy and with some inspiration she quickly begins to work on her brand new inspirational peace. Sunny meanwhile, happens to recognize the water balloon and goes to visit Peanut. She asks her to load up some more water balloons after explaining that if Peanut can keep sending them off, it will help her finish all the work she has to do a lot sooner. Peanut doesn't really understand, but she agrees to it anyway!

Spot reveals her brand new portrait to everyone, which consists of big splashes of paint with some items that mostly represent everyone. She then explains that she plans to include something that will remind everyone of herself too, she just hasn't begun yet and goes on to point out the flaw in Sunny's fence: She only built one side, making it easier for Cow to get in the corn field!

But, Sunny explains that she did this purposely so that Cow can still sneak in to grab some corn, then leave. She doesn't want Berry to think she's spoiling her, but she would feel badly if Cow couldn't at least have one ear of corn now and then. And at least this way, Cow thinks she has to go around the long fence just to get back inside, which means she will also be getting exercise and everyone shares a laugh as the episode comes to an end... 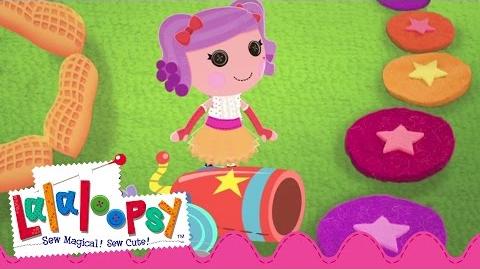