Dot's Moon Mission is the fourth episode of Season 1 of the Lalaloopsy™ TV Series.

Dot's spaceship breaks down, preventing her from taking a trip to the moon.

Dot and Bea are over at Dot's house planning a trip to the moon. According to Bea, the Sky Gate will only be open a short time and now is a good chance for Dot to go. While Dot and Bea plot the best route to the moon, Crumbs comes in with a basket of food for the trip. Bea mentions that Dot will also have all the cheese she wants when she gets there, because the moon is made of cheese. Mouse has a fantasy about the moon.

The next day, all the girls are helping Dot get ready for her trip. While Rosy is giving Dot a first aid kit, Crumbs announces that Mouse is missing. He has sneaked onto the ship and hidden in the picnic basket. Jewel adds some finishing touches to Dot's space suit, and Dot thanks everyone for their help. Meanwhile, Mouse is eating everything in the ship and ends up wrecking the engine! Nobody notices, even when Dot boards the shuttle and Bea and Jewel go through the final check list. When the ship doesn't take off, Dot finds that the engine is broken and no one knows why. Bea informs her that the next time she can go to the moon is in 39 years, when the Sky Gate opens again. Dot is devastated she can't go to space, so she returns home.

To cheer Dot up, the other girls come up with the idea to bring the moon to her. First they gather a lot of cheese from Pepper Pots 'N' Pans. To make the "moon" bouncy, they get Peanut's trampoline. According to Bea, there are sparkly creatures on the moon, so Jewel glues glitter on their pets. They decide to set everything up in the desert so Dot can't see them.

Peanut and Bea drive back to Dot's house to tell her they fixed her ship, while the rest of the girls wait in the desert. Bea convinces Dot that she can launch to the moon this time, and Dot boards the ship. They put a poster with stars on her window and attach the ship to the car, dragging her to the "moon."  Unfortunately, the heat has melted the animals' makeup and the cheese. They decide to haul ice blocks to the desert to freeze everything again. Bea and Peanut fake a meteor shower to buy the other girls some time. Dot begins to get suspicious when she can't see anything but "moons" in her window.

The moon landscape is finished, complete with a backdrop painted by Spot. They set up the ship next to the trampoline and the girls hide behind the set. Dot and Bird go outside and see mountains of cheese and sparkly moon critters. One of the critters bounces too hard and its outfit comes apart. Rosy tapes it back together, but they had to open the backdrop and she is worried Dot saw her. Dot collects samples and when she goes to plant the flag, Bea radioes her to warn her the Sky Gate is closing and she needs to hurry home.

The girls drag the spaceship home and everyone cheers when she "lands." Dot tells everyone how she felt "close to home" even though she was far away, and she winks at Cat, who still has glitter on her. 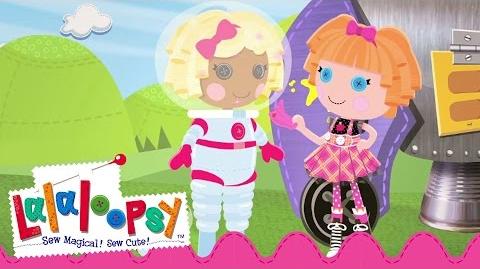