Dot and the Starcatcher

Dot and the Starcatcher is the twenty-second episode of Season 1 of the Lalaloopsy™ TV Series.

Dot tries to catch a falling star, but when she catches it, she realizes that the star is too beautiful to keep to herself. Jewel joins Sunny on her annual camping trip when Berry is sick.

Note: Berry Jars 'N' Jam wasn't exactly seen in this episode, but she was heard sneezing. 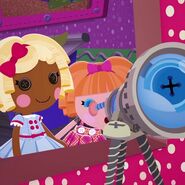 Add a photo to this gallery
Retrieved from "https://lalaloopsyland.fandom.com/wiki/Dot_and_the_Starcatcher?oldid=94873"
Community content is available under CC-BY-SA unless otherwise noted.