Eight Legged Friend is the sixteenth episode of Season 2 of the Lalaloopsy™ TV Series. It is the forty-second episode overall.

Jewel has to overcome her fear to help an injured spider taking up residence in her house. The Timber Rangers learn how to camp and hunt.

At Jewel's house, she is having a tea party with Cat. She eats one of the finger sandwiches with the crust cut off, and then gives a sandwich to Cat. But, Cat wants another. Jewel says she could never say no to Cat, so she gives Cat another sandwich. Jewel's clock chimes, meaning that it is now powdering time. She rushes off with Cat to the couch. Jewel announces that she will brush Cat's fur one hundred times until it is nice and smooth, and Cat can try on her perfume. Jewel starts brushing Cat's fur. Behind her, a spider appears. Cat notices it and informs Jewel. Jewel screams and runs out of the house. Jewel looks inside the house, and the spider is sitting on Cat's special bed, and Cat is mad, but Jewel can't go back in the house, because she is afraid of spiders. The spider is brushing its hair, and Cat gets mad again. Jewel comes up with a plan: they wait outside until the spider goes away, but that is a bad idea. Jewel looks inside and the spider touched her fourth-best tiara, so she goes inside. Jewel is angry with the spider, and tells her to drop the tiara. The spider literally drops it, but Jewel saves it. Then, Jewel tries to overcome her fear, but with no luck, stating that the spider is the biggest and hairiest she has ever seen. Jewel then says that the spider doesn't belong in her house, and tell her to get out. But the spider doesn't go away. Jewel tries hitting it with a featherduster, but with no luck. She tries spraying it with perfume, in lieu of anti-spider spray, but it doesn't work. Jewel tries offering it a tea sandwich with the crust cut off, but with no luck. Jewel points out her fourth-best tiara and leads the spider out of the house with it. Jewel lets the spider have the tiara on its way out. The spider has trouble moving along because she hurt her leg. Jewel figures it would be rude to kick her out of the house if she is injured. Jewel decides to go get Rosy to fix its leg, and tells it to stay in the house.

Meanwhile, in the forest, the Timber Rangers are on a camping trip. Forest says he will show them how to survive in the wildernes on an overnight camping trip from the Timber Rangers Manual. Lesson one-marking the trail so they can find their way home. Specs wants to leave a trail of breadcrumbs like in Hansel and Gretel. Forest says thats an interesting suggestion, but he says that the little forest critters will eat the trail. Forest says they will make Xs on the trees so they can find their way out. tbc

Ahem, in case you didn't know I'M supposed to be fabulous one around here

CHASING BUTTERFILES OVER RAINBOWS! Or in the forest at least

I got a sticker and you didn't

Around the campfire area.

Ooh, I have an idea, let's all grab onto Forest!

Until you are to be released into the wild, let's make the most of this. 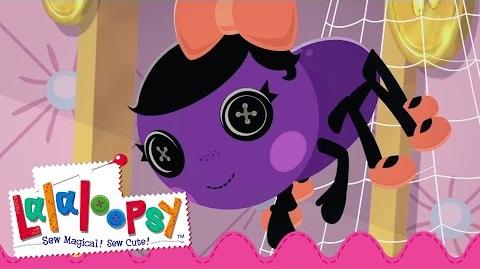 Spiders Are Our Friends Lalaloopsy 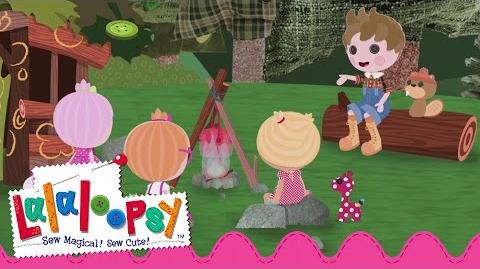