When Specs sees a mysterious ghost dog, she tracks it down. Bea follows Specs, leading them into a spooky mansion, where they meet shy Scraps Stitched 'N' Sewn.

Specs wants to read one more bedtime story, but Bea says they have read tons of "just one more" books. Specs chooses a ghost story, and Bea reluctantly agrees to read it, even though its scary. Then when she fell asleep there was a knock on the door. Specs went to the door and found a little pillow and sees a green glowing ghost dog. Specs wakes up Bea and tells her that the ghost dog was at their doorstep, but Bea doesn't believe Specs.

The next day, Sunny and Berry are on Sunny's tractor, riding through the pumpkin patch. Berry wants to have lots of pumpkins so she can make pumpkin pies. Berry gets her wish, because there are pumpkins everywhere! Berry decides to make different foods with the pumpkins.

Specs is eager to find the ghost dog, but Bea insists that ghosts aren't real. Specs goes running off anyway.

In a creepy house, a blue-skinned child is making the pillows out of cobwebs. It is revealed that she is the owner of the ghost dog.

At Spot's house, she is painting with Sunny's rake. She is going to return it to her when she hears a knock on the door. She finds a glowing green pillow on her doorstep.

Specs continues to search for the ghost dog, but Bea keeps saying that it is not real, even though Specs keeps seeing it.

Sunny and Berry both have tummy aches from eating too much pumpkins. Spot comes in and returns the rake. Spot then gets inspired by the pumpkins, and begins to decorate them all.

The blue child creeps up on the doorstep, and leaves another pillow. Berry comes out and finds it, and ponders who could've left it.

Bea and Specs keep searching, but Bea complains that her feet hurt, and continues to say that the ghost dog isn't real.

Spot is showing Sunny how to decorate pumpkins when they hear a knock-knock-knock on the barn door. There is another knick-knack. Spot tells Sunny that she received a knick-knack too.

Later, they both come outside so they can compare their knick-knack to Berry's. Bea and Specs pass by, and Specs tell them all that the ghost dog left the pillows. Bea still doesn't believe Specs. She says that ghosts don't exist in front of everyone, but everyone else sides with Specs.

Specs wanders by herself into the woods, searching for the ghost dog, and Bea follows her, but Specs is out of sight. Bea and Owl keep going, since Specs might be lost. Once they reach a mysterious part of the forest, Bea slowly starts to become scared. The path leads up to a haunted mansion. Specs keeps chasing the ghost dog, and Bea sees it. Specs goes into the creepy house, so Bea follows her to find her.

Back at the barn, Berry and Sunny are decorating pumpkins, and Spot is observing them. Berry has decorated hers with syrup and blueberries, and Sunny has decorated hers with hay. Zebra and Cow brown nose by making pumpkins of Spot. Spot likes Zebra's better, which makes Cow jealous, so Zebra and Cow fight over the pumpkin, which ends up knocking one of the green pillows into Sunny's pumpkin.

Bea walks into the scary house. She gets scared by a pitchfork, and even her own reflection, but she convinces herself not to be scared. But, then, she got scared of a shadow. But, it was Owl. But, when Bea sits down and think for a moment. The sofa spins around to another room. Bea meet Scraps found Specs and the ghost dog's name is revealed to be Lab. 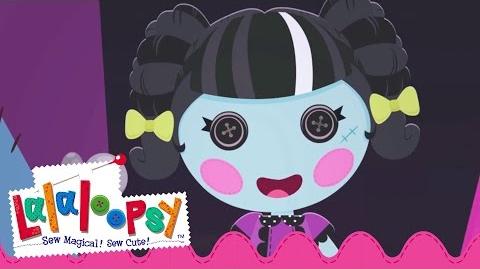 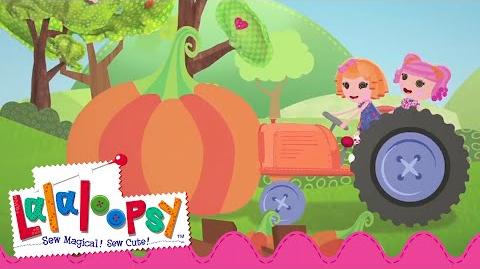 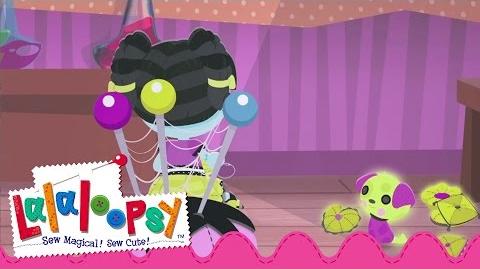 Halloween in Lalaloopsyland Lalaloopsy
Add a photo to this gallery
Retrieved from "https://lalaloopsyland.fandom.com/wiki/Knick_Knack_Knock_Knock?oldid=101352"
Community content is available under CC-BY-SA unless otherwise noted.