Life of the Parties

Life of the Parties

Life of the Parties is the fourth episode of Season 2 of the Lalaloopsy™ TV Series. It is the thirtieth episode overall.

Mari Golden Petals goes overboard with party planning when she accidentally schedules three separate parties for Mittens, Pillow, and Prairie all for Saturday the 3rd at 6 PM. Ace and Peanut race their go-karts against each other.

Mari has overheard that Mittens has just finished decorating her new ice castle and stops by to see it for herself. She then takes it upon herself to throw a housewarming party to show off Mittens' creation. Mittens does not understand what that is and confesses she hopes the party does not melt her castle. Mari explains to Mittens that she will take care of everything, which the party will have a winter fairy tale theme, and she schedules the party for the very next day at 6 pm.

She runs into Pillow who is trying to take a giant pile of soft pillows into her house and Mari helps her through the door. Pillow explains that the pillows are new and extra soft, which gives Mari the idea to host a sleepover party where the guests can have popcorn and make shadow puppets. Mari has Ladybug schedule the party for Saturday at 6 pm.

While leaving Pillow's house, Mari gets her calendar lassoed by Prairie, who is riding around on her pony. Prairie apologizes, but Mari doesn't take offense and instead gets an idea to throw a western themed cookout party for Prairie where the guests can wear cowboy hats and lasso tumbleweeds. Prairie confesses this would be a good chance to test out her homemade hot sauce. Mari schedules the party for the 3rd at 6 pm.

Peanut stops by Ace's garage to drop off her popcorn popper so he can take a look at it. Ace has Peanut place it in his projects pile.

Mari prepares the party supplies by separating everything into three boxes for each respective party. Ladybug tries to get her attention regarding the schedule mix-up but she doesn't notice.

Ace and Monkey finish up on his go-kart but first help themselves to a quick snack. Monkey eats Ace's banana for him so Ace gets another one, after which he gets an idea that maybe food can fuel his go-kart.

Hurrying up with her party planning, Mari quickly drops off the three supply boxes at the homes of Mittens, Pillow, and Prairie. Only she accidentally gives the girls the wrong boxes... Mittens receives Prairie's box, Pillow receives Mittens' box, and Prairie receives Pillow's box.

At Ace's garage, Peanut checks up on her popcorn popper when she notices Ace has been working on a condiment-powered go-kart and she is astounded by this feat. Ace suggests that he can use her popcorn popper as an engine to make Peanut her very own go-kart too.

Mari checks up on Mittens' progress when she notices Mittens is creating a blue snow horse instead of an ice unicorn like intended. Mari soon realizes that she accidentally gave Mittens Prairie's party supplies instead. She rushes over to the box and pulls out a carrot which she sticks onto the horse's crown to properly transform it into a unicorn. Mari leaves Mittens by telling her she will check up on her again first thing tomorrow morning.

While checking up on Pillow, she questions Mari what "pin the tail on the dragon" has to do with her sleepover party. Mari discovers that Pillow got Mittens' winter fairy tale party supplies instead, just as Prairie approaches asking Mari why she gave her a book of bedtime stories. Mari explains the supplies got switched and quickly trades Pillow the book and Prairie the tail. Pillow points out that it still seems out of the ordinary for the game to be used at Prairie's cookout party, but Prairie does not mind it at all.

The next morning, Peanut returns to Ace's garage to check up on her go-kart that Ace promised would be ready. He unveils it to her and she is astonished at how well it turned out, after which she points out how cute it is that their pets are pretending to race in the go-karts. Peanut then suggests that she and Ace should race each other in the karts. Ace humbly accepts.

While on her way to Pillow's house, Mari tries to figure out how to solve the party dilemma. She decides that she should postpone two of the parties to later dates. She first approaches Pillow and tries to convince her to reschedule the party but finds out that Pillow has been napping all morning to stay up for the party tonight, and that all of the balloons will only stay afloat for the night. Mari then tries to get Prairie to postpone her party but finds out that Prairie has already fired up her grill and began her barbecue. Lastly she tries Mittens, which she then finds out Mittens can't reschedule because it is going to snow tomorrow and her castle and unicorn will be completely covered.

Peanut and Ace begin their go-kart race with Ace fueling his up with ketchup and Peanut adding popcorn into her popper engine. The ketchup fuel causes Ace's go-kart to spin out of control, after which Monkey sprinkles some pepper which causes the go-kart to reverse in direction back to Peanut's position. She then jokes that they are now tied.

At Prairie's party, Mari tries out one of her hot sauce covered biscuits. Mari's mouth immediately begins to burn. The two then proceed to roping some tumbleweeds, which results in Mari accidentally hogtying herself with the rope. Prairie jokingly says she's never seen anyone do that so quickly. Mari tries to excuse herself afterwards.

Moving onto Mittens' party, Mari adorns herself in a fairy tale tiara and proceeds with Mittens to the ice unicorn sculpture. Mittens suggests what activities they should do next but Mari confesses that she needs to quickly return home to change into her proper snow garments.

Peanut and Ace continue trying to make their go-karts start up, Ace tries using salt and garlic but they both backfire. Peanut fires up her popper and her go-kart zooms off leaving Ace and Monkey covered in buttery popcorn. Ace admits the last thing to use is syrup, which fortunately makes the go-kart drive forward, then abruptly stop, then drive forward again.

Mari rushes over to Pillow's party but before Pillow can finish greeting her she rushes off again trying to make her way to the other parties but quickly forgets which ones she's already attended and afterwards falls down confessing she took too much responsibility.

Peanut's go-kart continues to speed down the road but she hits a rock and spirals down a slope into a huge thicket. Ace drives over to where Peanut crashed and offers her a ride, but notices he's out of syrup and she's out of popcorn. The two are tied yet again.

Back at Mari's house, she begins to sulk until Ladybug hands her the tin-can phone. On a 4-way call she tells Mittens, Pillow, and Prairie to meet her over at her house. While the girls are gathered at her patio table, Mari explains she scheduled their parties all on the same day and time and apologizes for ruining them. Prairie comforts Mari by saying she didn't ruin hers. The girls all agree to combine their parties into one big "winter slumber-cue". Pillow offers to bring pillows and balloons, Mittens will bring her unicorn, and Prairie will supply the hot sauce. Prairie then tells the girls to meet her back at her place.

Peanut and Ace, now stranded out in the bushes, try and get help by shouting out loud so somebody can hear. Mari, Mittens, Pillow, and Prairie overhear them as they pass by on the road and shout back to them. Peanut suggests they get up higher so the girls can see them so everyone climbs up on each other and Prairie spots Monkey. She uses her lasso to reel in the go-karts. Mari then invites the two to their winter fest slumber-cue, with Prairie adding in that they better hurry before her barbecue goes out and they won't be able to try out her hot sauce. Ace then helps himself to the hot sauce but Mari warns him but it is too late and Ace begins panting for air. Peanut admits she's never seen Ace move around so quick, after which Ace gets the idea to use the hot sauce to fuel his go-kart. The go-kart quickly zooms forward, thus having Ace invite the girls to hop on board for a fast ride to Prairie's.

The go-kart, now pulling Peanut's go-kart, Pillow's pillows, and Mittens' unicorn, pulls up to Prairie's house. Mari gleefully exclaims that this is the best winter fest slumber-cue ever. Prairie offers the guests some of her barbeque, Pillow offers everyone a nap over at her hamock and pillow area, and Mittens offers some of her blueberry punch. Ace asks Prairie if he can have more hot sauce, which he then proceeds to use for his go-kart. Mari tells Ladybug she should plan another party like this one next week, and the week after. Ladybug faints. Peanut's go-kart zooms past Mari and her calendar gets stuck to the engine which makes Mari then chase after Peanut and Ace in their go-karts into the wide open range, but Mari is too slow and can't get her calendar, which makes Prairie, Pillow, Mittens, and Ladybug laugh!

Pillow plans out her party with Mari

Mari stops by to drop off Prairie's party supplies

Prairie's hot sauce is TOO hot for Mari! 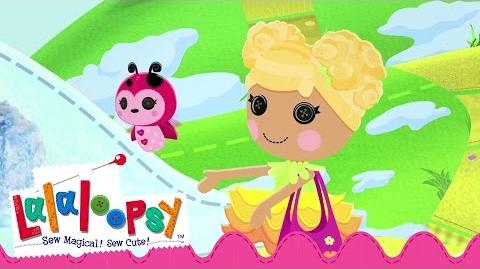 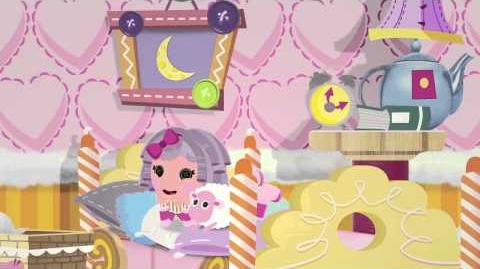 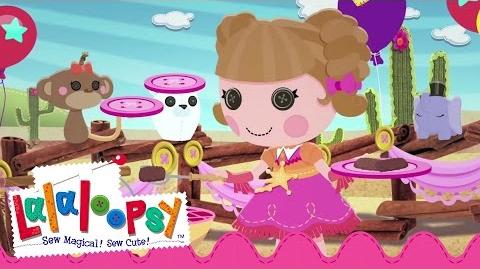 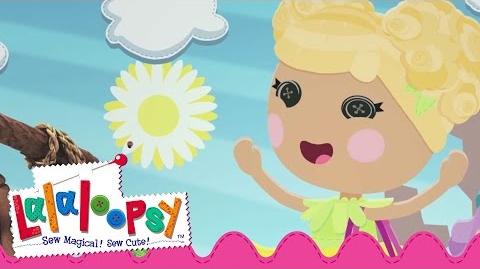