Nighty Knight is the third episode of Season 2 of the Lalaloopsy™ TV Series. It is the twenty-ninth episode overall.

Peanut and Pix E. help Sir Battlescarred overcome his fear of many things by having them all go on a quest to retrieve a fabled amulet. Jewel struggles to find the perfect necklace to wear for her portrait.

The episode starts off with Spot standing near Mittens' house, painting a snowman on top of a hill. She then asks Zebra to tilt the snowman's head a bit more. Zebra goes on top of the hill and adjusts the snowman's head, but it falls off and gathers snow, leaving a giant snowball rolling towards Spot. Sir Battlescarred appears from behind another hill, then snowboards down on his shield and blasts the snowball out of the way. Spot thanks Sir Battlescarred, and he then leaves. Spot goes home to get ready for Jewel's royal portrait tomorrow.

Meanwhile, Jewel is looking for jewels to wear for the portrait, but, as she is searching, she gets stuck in a pile of jewels. Sir Battlescarred comes to the rescue and frees Jewel from the jewels. Suddenly, Sir Battlescarred hears another cry for help and hurries off.

Pix E. is hanging from a step ladder, feeling scared of heights, despite the ladder being less than a foot above the ground. Peanut is there too. Sir Battlescarred comes to the rescue, but, as he is carrying Pix E. down the ladder, he gets frightened by his rescuee's firefly. As he hurries home, Peanut and Pix E. decide to go to Sir Battlescarred's castle.

Meanwhile, Jewel is stumped about finding a jewel for her portrait. Then, Cat gives Jewel an idea. 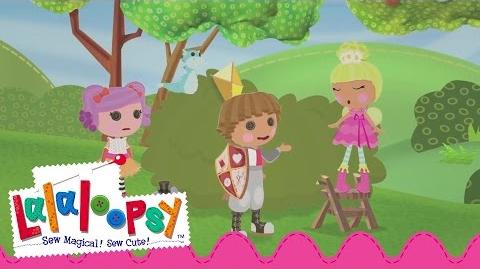 Nothing to Fear! Sir Battlescarred is here! Lalaloopsy
Community content is available under CC-BY-SA unless otherwise noted.
Advertisement