Princess Parade is the second episode of Season 1 of the Lalaloopsy™ TV Series.

Jewel and Tippy are members of a Princess Club and want to make a parade based on princesses. They call on their friends for help, and Jewel decides they need to be taught how to act like princesses.

Jewel is starting a princess club, and she crowns Tippy as the vice president, but they want to add more people to their club. Just outside Jewel's house, Peanut and Spot are helping Sunny fix her wagon. Jewel asks if they want to join her club and while Spot and Peanut are interested, Sunny says she has to do chores. She eventually agrees to join for a short time, but they forget to park the wagon correctly.

Back at Jewel's house, Jewel gives each girl and her pet a tiara, then gives them three lessons on how to be princesses. The first lesson is How to Walk Like a Princess. Jewel demonstrates, but even the Vice President Tippy has trouble with this due to her clumsiness. Sunny and Peanut fail this lesson as well. Spot does it correctly, but she customized her tiara incorrectly, disappointing Jewel. The second lesson is How to Talk Like a Princess. They have a tea party as a test. Peanut's voice is too loud, and Spot plays with the sugar cubes. Sunny does well... until she slurps the tea and wipes her face with her hand.

The last lesson is How to Dress Like a Princess. None of the girls do well until Sunny matches Jewel's dress and mannerisms, but she begins to scratch because her dress is itchy. She then sees her wagon rolling down the hill and runs to stop it. This gives Jewel the idea to have a parade, and she sends the others home to practice their lessons while she and Tippy prepare the floats. They ask Crumbs for help making large edible floats while Elephant tries to pull the floats by himself, but they're too heavy.

Jewel, Crumbs, and Tippy finish the floats and decide to take a break. Elephant tries to pull them again with no luck until the other pets see him struggle, so they try to help him. But the floats roll too quickly and crash into a boulder!

Jewel sees the destroyed floats and thinks they have to cancel the parade, but Sunny, Spot, and Peanut arrive and say they can fix the floats with enough frosting. After the floats are reassembled, Jewel is excited to start the parade... until she realizes she didn't invite anyone! This is when Peanut's outdoor voice becomes useful. She walks around Lalaloopsy Land announcing the princess parade to everyone in Lalaloopsy Land, and the other girls get excited and line up on the street to watch. When the parade starts, the Princess Club takes their places on the floats, each one wearing a costume personalized to their own style. Elephant tries to pull the floats one more time. This time he succeeds... with the other pets pushing the floats from behind!

From a promo on Nick Jr. for this episode

Dancing on a waffle! 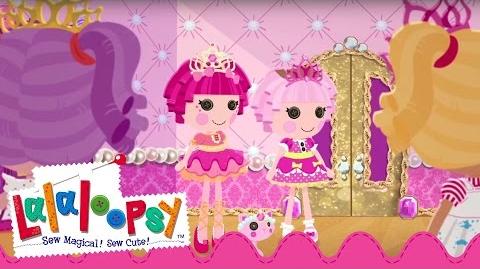 How-To Be A Princess l Lalaloopsy 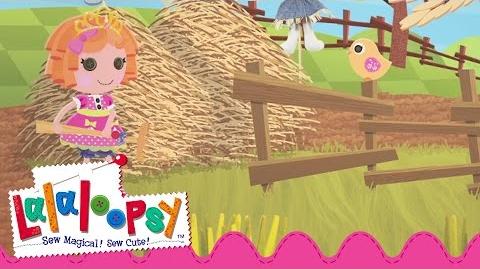 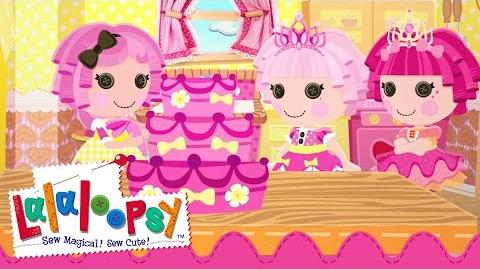