Princess Spaghetti Day is the sixth episode of Season 2 of the Lalaloopsy™ TV Series. It is the thirty-second episode overall.

Jewel tries to make everything perfect for the royal visit of Suzette La Sweet, but ends up having a messy Spaghetti Day celebration with Trinket, Spot, Pepper and Peanut.

One night, Princess Jewel wakes her little sister Trinket and Kitten up very early because they have a important visit from Suzette La Sweet, and they have to be prepare by doing four steps on Jewel's list: Royal Decor, Royal Attire, Royal Reception and Royal Manners. Trinket asks her big sister what is a decor, and she says it's the royal word for furniture and that they have to redecorate.

Meanwhile at Spot's house, Pepper Pots 'N' Pans makes some spaghetti for her, Pig, and Zebra for lunch. When Pepper asks Spot how's the food, Spot says it tastes great, but wants to know how does it fly. So, she tosses the spaghetti and it lands on the wall, and it looks just like Zebra. Then, Spot tosses the pasta again. This time it lands on the table, and it looks like Jewel. When Spot makes the pasta look like Pepper, she says that it's like looking in a mirror covered in tomato sauce. Then it is Pig's turn, but this time the spaghetti falls on Spot's head. Spot loves her new hairdo, and Pepper says that she wishes she had a spaghetti hairstyle like her. Spot makes her wish come true by putting the pasta on Pepper's head, and Spot twirls her pasta around while Pepper says she looks like a spaghetti princess. And as such, Spot says that this day should know as "Spaghetti Day" in Lalaloopsy Land, a day where they wear spaghetti hairdos and play spaghetti games. Pepper loves the idea.

Back at Jewel's house, the sisters are ready to follow the steps to make the house perfect for Suzette. First, Trinket and the pets have to move the furniture. Next, they need to get the trinkets on display and have a royal picture gallery.

Spot finishes the touches on Pepper's spaghetti hair, then says that something is missing. Pepper asks if it's a missing ingredient, perhaps some pepper or oregano. But Spot says that what they need is more friends to enjoy Spaghetti Day with. Pepper opens her window and calls out for people to participate in Spaghetti Day, but nobody comes. Luckily, Spot has an idea.

Jewel says that step 2 is attire, which means what they wear. She is planning for her and her little sister to wear tiaras. When Jewel puts a big tiara on Trinket, it is too heavy for her. Next, Jewel goes to get jewelry and puts a bauble and necklace on her, Trinket, and the cats.

Meanwhile, Spot makes invitations for Spaghetti Day. A piece of pasta falls to the ground, and Zebra and Pig start eating it until Zebra gets stuck in Pig's mouth before getting unstuck. Pepper asks Spot who should they invite, and she says that she wants to invite Jewel. So, Spot goes off to get her while Pepper sets off to find Peanut Big Top.

Outside of Jewel's house, the princess sisters have to do a royal reception, which means how to say hello to someone. Jewel tries to get Trinket to say "Most greetings your royal, serene most gracious, elevated high-up highness. But Trinket can't say it right, so her big sister says to just smile and curtsy. Then, Trinket has to strew flower petals on the path when Suzette walks on it. So, she does it while her big sister pretends to be Suzette, and now she has to open the door while facing Suzette. Trinket can't reach the doorknob, so Jewel opens it for her.

Meanwhile, Suzette gets herself ready to go see Jewel. Her poodle hops on the grass, and Suzette has to make her jump in her basket so her paws can't touch the ground.

Back at Jewel's house, she is fixing her sister's crown when all of a sudden, the doorbell rings. Jewel is worried that it might be Suzette and tells her cat to get her In-Case-Of-Emergency-Clipboard. As she reads it, step one says "Remain calm" and step two says "Open the door." So Jewel opens the door, but it turns out to be Spot, and Jewel is relieved. Jewel asks her friend what happened to her head, and Spot wishes her a Happy Spaghetti Day. Jewel says the house needs to be clean and neat when Suzette comes, and then Spot tells her about her pasta party at her house, which will involve pasta games, activities, noodle art, and noodle wigs for everyone. Trinket gets excited and asks her big sister if they can go, but Jewel states that while they would love to go, they can't be messy when their visitor comes to their house. Jewel thanks Spot for inviting them before saying goodbye.

When Pepper arrives at Peanut's circus, she tells her about all the activities for Spaghetti Day. Peanut asks if that is all you can do with noodles, and Spot claims you can do anything with spaghetti, such as making noodle art and noodle wigs. Peanut suggests bringing a spaghetti dunk tank to the party, and Spot loves the idea.

The next thing in the list is Royal Etiquette, which is a fancy word for manners. The royal siblings start with table manners by placing dinner forks, cheese forks, tuning forks, soup forks, salad forks, soup spoons, teaspoons, "U" spoons, and "V" spoons. Trinket holds a big spoon and asks Jewel where does it go, but Jewel says they won't be needing that today. Since Suzette's poodle is picky, the siblings have to be aware what food the visitors like to eat. Jewel's list has all the things Poodle does not like to eat; her likes include any of the above on a sliver tray, garnished with mint or a side dish with noodle. Trinket holds up a big sliver dish, and Jewel puts a dog bone on it. Now, Jewel wants her little sister to go outside and strew her flower pedals again until Suzette comes, but Trinket wants to play.

While Trinket strews flower pedals outside, she overhears Spot, Peanut, and Pepper having a blast with Spaghetti Day. Over there, Peanut and Elephant jump into a bowl of pasta. So, Trinket decides to go over to Spot's house and join them. When she arrives at Spot's house, Spot hugs Trinket and shows her that she has wrapped pasta around her house. But Spot wonders how they are going to top this. Peanut and Pepper are thinking about making a spaghetti fountain and mountain. Trinket suggests sliding down a spaghetti slide, and the girls love that idea. Spot promptly tells Pepper to fetch more pasta.

Meanwhile, after Jewel practices what to say when her visitor comes over, she has to make sure Kitten and Cat practice their Pet Etiquette. First, she asks them what to say if the dog wags their tail at them after meeting them for the first time, and they meow politely. Next, she asks them what to do if the dog barks at them instead, and the pets say "Meow." The last question is what to say if the dog behaves in a un-dog-unified manner by licking, panting, or tracking mud from the outside. Kitten answers that question by growling, but Princess Jewel says that's not the right answer, so Cat answers correctly by meowing politely.

After Pepper, Elephant, and Peanut put pasta on the slide, they slide down it. Back at her house, Jewel has finished everything on the list, but then soon realizes that Trinket is missing. Just then, she hears a loud boom sound and pasta splatter all over her house's door when Peanut shoots pasta out of a cannon. Jewel knows it's all in good fun, but doesn't want her house to be messy when Suzette comes, so she rushes over to stop the girls.

Spot, Trinket, Pepper, and Peanut are having a blast with Spaghetti Day by throwing noodles at each other. Then, Trinket slides down the spaghetti slide. Suddenly, Jewel appears and the girls invite her to play with them. Since she's running a few minutes ahead of schedule because of her planning, she says she'll do one trip down the noodle slide. When she slides down it, she loves it and wants to do it again. Jewel tells Spot she's enjoying Spaghetti Day, but she says that something is missing, and that is accessories. First, Peanut Big Top has her style wrapped up with pasta bracelets. Next, Pepper has a tortellini tiara and rigatoni rings. Finally, Trinket wears a pasta baseball hat and pretends the stick she is holding is a baseball bat. She hits a flying meatball and gets a home run while the girls cheer for her.

Meanwhile, Suzette is walking with her poodle, looking forward to meeting the royal sisters. She sees bushes, fences, and trees covered in spaghetti. Then, Poodle sniffs the pasta coming from Spot's house and runs off with her owner chasing her.

Spot announces Jewel as their own Spaghetti Day Princess when all of a sudden, Suzette arrives and is surprised to see her friend messy. Then, Jewel tells her she had to say yes when Spot invited her for Spaghetti Day because it was important to her. Then, Suzette tells Jewel they both have something in common, and that is that Jewel is a loyal friend. She states that Poodle loves spaghetti. Poodle pops out of the pasta and Jewel pets her, but then notices that Suzette is missing. Suzette is actually at the top of the spaghetti slide and slides down. Upon landing, she says "Ooh! Again, Again!" All the girls then laugh as the episode ends. 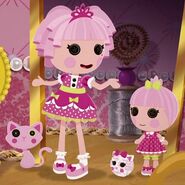 A spaghetti art of Zebra 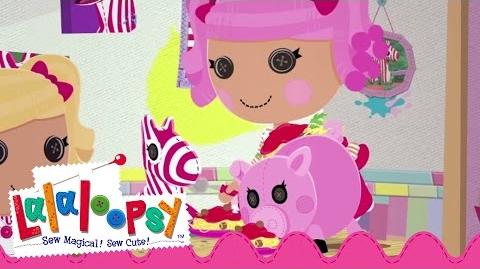 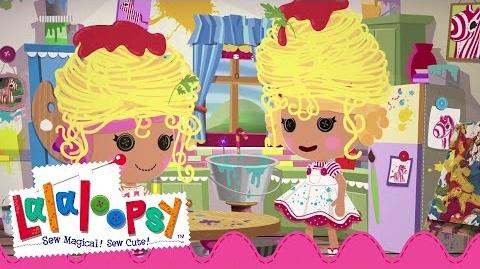 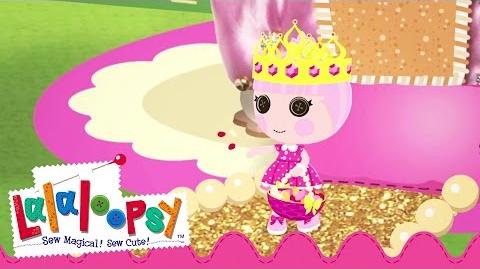