Sleepless in Lalaloopsy Land is the eighteenth episode of Season 1 of the Lalaloopsy™ TV Series.

Pillow's little sister Blanket is walking in her sleep, and Pillow does everything she can to cure Blanket's sleepwalking, but learns that sleepwalking runs in the family.

Pillow begins to notice that her sister Blanket is not sleeping through the night and begins walking in her sleep. To get to the bottom of this she seeks the help of Dot, Bea, and Berry.

Berry installs cowbells all around the house so Blanket will trigger a noise that will alert Pillow. When that fails, Pillow suggests using Cow's fencing to pen Blanket inside her own quarters.

Pillow consults the book Bea had given her and finds out sleepwalking is inherited from within the family and realizes she sleepwalks as well.

She eventually realizes that Blanket must be too excited to sleep in her bed because of her first day of school. Blanket had been busy preparing herself for school by walking in her sleep throughout the night. Pillow gets Blanket ready for school, Blanket then says good-bye to her pet Lamb, and the sisters walk to Bea's school house.

Outside the school house, all the older sisters are impatiently waiting with their younger sisters while saying good-bye to them. Bea rings the school bell and the girls proceed into the building. And Pillow says she doesn't want to hear the word "sleepwalking" together EVER AGAIN and smiles; Sheep baas. 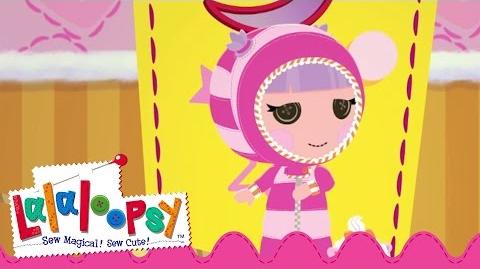