Spot-itis is the third episode of Season 1 of the Lalaloopsy™ TV Series.

A strange illness hits almost everyone in Lalaloopsy Land. As Rosy tries to find out the cause of this, she quarantines everyone inside her hospital/home.

Rosy is on her way home after she decides that nobody really needs her help that day. But she suddenly reconsiders when she sees Jewel walk by, covered head to toe in what looks like paint spots. Rosy hands a mirror to Jewel before asking her if she has any symptoms. Jewel claims to feel fine, but Rosy asks her to let her give her a checkup anyway, since she has never seen this illness before.

Elsewhere, Peanut and Elephant attempt to walk on stilts, but the moment she releases her pet, he falls over. Peanut tries to convince Elephant to try again, but he refuses out of fear. So, Peanut has a plan to fix this and using her stilts, she walks off.

Back at Rosy's, Rosy has just finished giving Jewel a checkup. Later, Rosy continues to see others with Spot-itis and takes them to her hospital right away! Then, Rosy offers Peanut if she sees more people with Spot-itis, she has to tell them to go to Rosy's hospital. A few hours later, Rosy sees Spot painting the buttons on the trees and notices that they are still dripping paint! Rosy finally realizes that that the paint dripping is causing colorful spots to drip all over their bodies. She then tells them that the cure to Spot-itis is just a face wash and elbow grease.

Dot and Pillow covered in Spot-itis 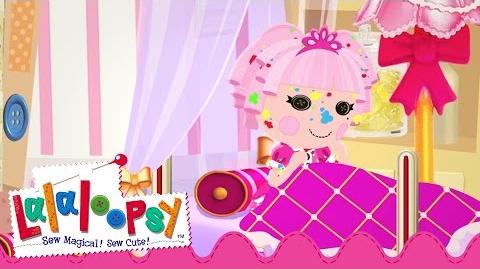