Spot Draws the Line is the tenth episode of Season 2 of the Lalaloopsy™ TV Series. It is the thirty-sixth episode overall.

Spot draws a new chalk mural, along with a new chalk Lalaloopsy named Trace E. Doodles, which magically comes to life and invites Spot and Zebra to her chalk world. Bea tries a direct a play with Patch and Peggy, but their confliction causes the play to fall apart.

The episode starts off at Spot's house, with Zebra looking at its reflection. Zebra wants its reflection to come out of the mirror. Spot tells Zebra that reflections aren't real. Zebra becomes saddened when Spot asks Zebra to help her decide what to make art with. Spot searches through a box when she finds a box of chalk. She decides to make a chalk Lalaloopsy Land on the blackboard behind her. Spot then decides to draw a person living in it. Strangely, the person appears closer than before. Bea comes in announcing that she is putting on a play, and asks Spot if she can paint the backdrops. Spot agrees to this and Bea leaves.

At Bea's house, Bea is putting on a play with Patch and Peggy Seven Seas. When Bea tells them the parts, Peggy gets upset that Patch has more lines than her. Patch thinks that Green-beard is more important. Bea calms them down by saying they are both important and adds more lines to Peggy's script. When Bea is in the middle of narrating, Patch interrupts by asking who is the captain of the ship. Peggy says she is and brags that she has sailed the Seven Seas. Patch argues by saying there is eight. Peggy thinks he is making up stories and wants to see proof.

At Spot's house, the zebra in the drawing moves and Zebra gets scared. Spot asks herself is she is not imagining this, and the girl in the drawing talks, which ends up scaring Spot. The girl says her name is Trace E. Doodles, and asks if Spot and Zebra would like to visit her chalk world, but first Spot needs to draw a door. She eventually does so, but spends all her time decorating the door, which after she enters right in, but she slams the door so hard she knocks the shelf off, which makes the bucket of paint that was on it wash the door away....

In Chalk Land, Spot trips over the Zebras, and she makes a chalk rainbow. She then discovers when they're in need, they can just draw whatever they want. The Zebras want to slide on the rainbow, so Trace E. just draws a bland and boring slide, but Spot draws a twisty slide on the rainbow. Spot makes up things as she goes along, and adds a ski jump to the end of the slide that Trace E. made, and tries to think of something else for the Zebras to play with, so Trace E draws a ball. Spot draws an air pump to make the ball bigger. Spot kicks it and it bounces about. Trace E. gets inspired, and Spot draws springy shoes on the Zebras. They bounce away and Spot and Trace E. chase after them.

Back at the stage, Bea tells the pirates to visualize a scene in which they are searching for the evil parrots' treasure on a beach, but it's hard to believe that they actually are since Spot is busy, but they don't know that she is in Chalk Land. Patch and Peggy say their lines, but they block each other so they seem more important, which ends up with them falling off the stage, so they take a break.

Back in Chalk Land, the ball continues bouncing and the Zebras continue to bounce after it and Spot and Trace E continue to follow along. Trace E. decides to draw a simple hat, but Spot tells her to make it funkier. She adds cracks and flowers, but when she draws a feather, she draws outside the lines, but Spot tells her that she does not have to color inside the lines. Zebra bounces so high that it is about to fall, so Trace E. draws a marshmallow to cushion its landing. Trace E. gets inspired to make marshmallow trampolines for the Zebras, while Spot makes marshmallow riders for the girls, and they once again frolick around on their marshmallows.

Back at the stage, Bea tells the parrots to act more evil, and that it is time for the balloon sword fight between the kids and the parrots. Peggy gets upset that she got a orange sword, and wants a green sword like the one Patch has, but Patch likes green too. Parrot pops Owl's sword, and so Patch's Parrot, Peggy's Parrot, and Owl start popping Patch and Peggy's swords. Trace E. gets inspired to make a fountain of hot cocoa, but when she reaches for the faucet, she accidentally snaps off a piece, and the cocoa slowly starts flooding Chalk Land. She draws another faucet, but it snaps off. Spot draws various things to catch the flood, and together they ride on their marshmallow.

Peggy blames Patch's parrot for popping the balloon swords from earlier, and Patch says the Peggy's parrot is "pop poppy" but it is either "pet poppy parrot" or "pet peppy puppet." And so the kids start saying various words that begin with the letter P, but the stage falls on them, and they quit, making Bea sad.

Spot, Trace E, and the Zebras continue to ride on their marshmallows across the cocoa river, but their marshmallows are running out, so Spot draws a boat, and tries to reach for the Zebras, but Trace E draws motors at the end of the boat, making the boat a speedboat. Spot draws an anchor that stops the boat, and they save the Zebras, but they need to stop the flood, so she draws a drain and throws it in the river, stopping the flood. Spot needs to go home to paint the backdrops that she promised Bea, but Trace E doesn't know the way back.

Bea invites Patch and Peggy back to show them some new lines that she created, but Bea has made the new script based off of Peggy and Patch's rivalry, and while Bea thinks they like it, they realize that they have been arguing all this time, when they should have been friends, and they make up. They all go to Spot's house to see how she is doing on the scenery.

Spot wishes they could get up on a cloud, so Trace E draws one, and she also draws fans so they can make the cloud fly in the sky. Spot draws binoculars to see where they are, but she loses her chalk, and almost falls off the cloud, and Trace E only has one tiny piece left.

When Patch, Peggy, and Bea arrive at Spot's house, she is nowhere to be seen. In Chalk Land, Trace E uses her last piece of chalk to draw heavy things to make the cloud sink, and they arrive safely on the ground. Trace E thanks Spot for teaching her to use her imagination, but Spot can't find the door back to Lalaloopsy Land, so she calls out to her friends to find chalk and draw a door, and she and Trace E step out, and off-screen, she explains to them what happened.

Later, Trace E once again thanks Spot for helping her use her imagination, and begs her to stay in Lalaloopsy Land, but Trace E has to go back to Chalk Land, but she says Spot and her friends are welcome to visit anytime. Trace E steps back in and they go to sleep. 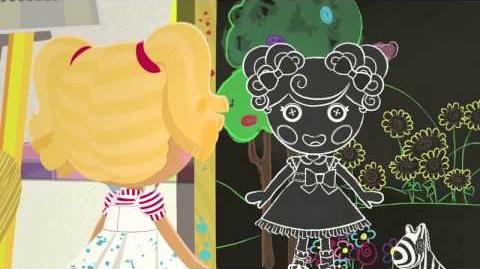 Nick Jr. Airs NEW Lalaloopsy Episodes Based on the New Color Me Dolls 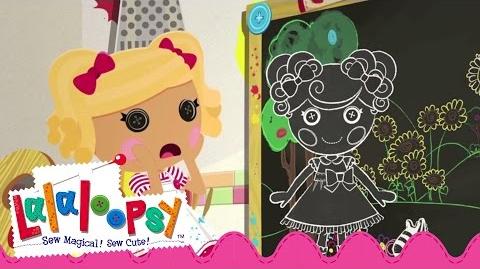 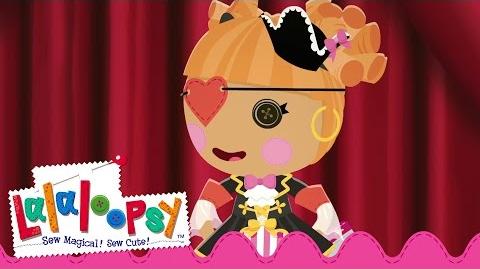