Stuck on You is the twenty-third episode of Season 1 of the Lalaloopsy™ TV Series.

Forest and Jewel must work together when their hands get stuck together in a box because of a mishap in Misty's magic trick.

Meanwhile, somewhere else in Lalaloopsy Land, Forest is busily packing up some needed items with Beaver while they overlook the temperature object they have. They need to wait for just the right moment to collect syrup or else it won't taste very good. The moment it is deemed right, they then take off!

Misty is somewhere in the middle in all of this, preparing to show Rabbit her brand new trick with a special box. But she's going to need some friends with hands in order to demonstrate, and when Jewel and Forest both happen to walk by, she "volunteers" them for it. They try to explain to her that they're both too busy but she claims it should only take a minute, so they agree... but only if she hurries up.

Crumbs is busily working on the special pretzels that Jewel had asked her for, but she's having trouble making them right. She isn't really sure she can do it but she's going to have to try anyway...

Misty explains how her trick works to Jewel and Forest after she gets them to both put on a glove and stick their hands into the box. She then proceeds to chant the magical words after informing them that it is safe and this trick will switch their gloves from one hand to the other. After she finishes, she waits but has to tell them to pull their hands out of the box. They claim that they are trying, but their hands won't come out so Misty just tries to chant another spell, followed by another, and another...

Crumbs has managed to make a bow, a happy smiling face, and a question mark with the pretzel dough. It's very hard and she's gone through a bunch of it, but doesn't understand why it is hard when she's managed to make a lot harder sweets before. Such as a very pretty cupcake, a bowlicious cake, and other things too. But she still can't give up right now, so she begins throwing the pretzel dough into the air thinking it may work like a pizza.

Upon arrival they find her house littered with flour and dough. She is quick to explain what her problem is, but promises to finish in time. So with that, Misty then takes her own turn to explain what happened to them and Crumbs grabs a big bowl of butter. She scoops a little bit of it into each of the hand holes of the box, but no matter how hard they try to tug, their hands do not budge one inch. So with one other idea, they try to have all of their pets help to yank on the box, but this just ends with everyone on the ground!

They take a moment to ask Misty where she may have gotten the box, to which she explains she had made it with some instructions, but she doesn't know where they are and leaves to go look for them.

Forest can't wait any longer though and points out that he needs to collect his syrup now while it's in good shape. Jewel is also in a hurry and finds herself growing impatient. They need to just focus on one thing and sacrifice the other, but this only ends in an arguement because Forest deems his tree tapping to be a much bigger deal then preparing for a party. They stop fighting after Cat offers to flip a coin and Forest wins, so after Jewel takes Crumbs' egg timer and they leave.

Upon arrival, she explains that when the time is up they will go to do what she needs to do. Forest is concerned by this, but he gets to work after asking for her aid first. Jewel isn't really sure and worries she may get hurt, but Forest convinces her that it will be fine and he begins to go over how the tree tapping process works.

As she continues to try to figure out why she keeps messing up, Crumbs happens to notice Peanut and realizing that she's great with twisting things, she asks for her aid in making the perfect pretzel.

Jewel meanwhile, is trying to convince Forest that he should try a more efficent system for tree tapping. Instead of going about it randomly like he does, but Forest doesn't really think it's a problem, so he goes to continue until the time ends. He tries to reason with Jewel but she claims it's his own fault for being unifficent and they leave.

Peanut shows Crumbs how to fold the pretzel while realizing that it's now lunch time for Elephant. She has to get going but Crumbs still doesn't get it, so she offers to draw a diagram for her first.

At home, Jewel is going over everything on her checklist once again. She comes by her crowns and tries to get opinions from Forest but he seems to care-less... until she decides to make him try them on instead. He really doesn't want to, but does so anyway until she decides on one. She then decides they have to practice how to wave like a princess now. Forest doesn't understand this, since he believes a normal wave is much friendlier. But Jewel wants something more formal. After arguing for a while, they begin to attempt cursying until they realize just how painful it can be while they are stuck like this, so they move onto dancing... something that goes pretty bad too.

Forest apologizes that he doesn't really know how to dance, but the time runs out so it's his turn again anyway. But Jewel tries to get him to stay with her since she thinks they can finish really soon and eventually this turns into a big arguement!

Misty attempts to try to locate the instructions to her special magic box but so far has no luck...

Eventually Forest points out that instead of arguing and wasting time with complaints, maybe they should just try working together instead. Jewel agrees on this and he decides to ask her for some advice on how he can make a syrup system for tree tapping.

Crumbs struggles to read the diagram properly and when a sudden gust of wind forms, it carries it out the window. She really fears she may never finish now, but she musn't give up!

At the tree tapping sight, Jewel reveals her efficent plans for a better system. They give it a try and Forest is glad they did, given that it really saved him a lot of time. So since he's done, they head back to finish preparing for the princess ball.

As Crumbs continues to work, she suddenly trips. While this seems bad, when she catches the dough she sees that it has been properly folded into the right pretzel shape! She can get them all done by tripping and gets right to work!

Forest has managed to help Jewel decorate in no time at all back at her place again. As they are talking, a small paper happens to fly into the room and they think it may be the instructions they needed. While it is confusing, Forest and Jewel give it a try and to their surprise, it works!

Forest decides that because they are now free, he should probably get going now so that Jewel can finish for her princess party. However, Jewel has other plans and she asks Forest to attend as her special guest, as thanks for all of his help. Forest isn't very sure he can do this, since he's never attended a princess party before, but he's quite happy to accept the offer anyway!

Misty and Crumbs are both rushing so that they can hurry up and get to Jewel's princess ball in time. They have both finished their tasks and Misty reveals her instructions happened to be inside of her pocket this whole time. But it turns out that the paper Jewel and Forest have was not the instructions, but the diagram Peanut made for Crumbs on how to fold pretzels the right way. But, given that everyone is now fine and dandy, it's time for the dance!

Everyone is really happy and eager to see what Jewel has created, but she struggles to remember how it should go and even mentions how it doesn't feel right anymore. Luckily, Forest has a quick fix and he puts their hands back into the box, allowing them to dance together. 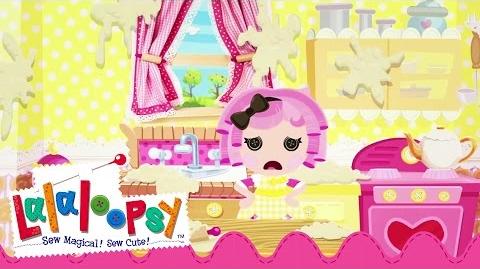 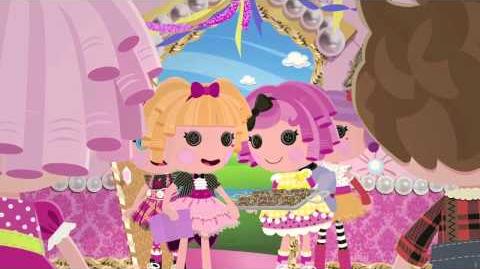