When Peanut loses her voice and can't help Elephant do his show, she asks Pillow to step in to help. Marina teaches Whale how to tie a knot.

Peanut is in the middle of practicing announcing Elephant's big show, and then he balances a chest with Peanut on it with his trunk. He then lifts Peanut in the air, and she does a flip, and she lands on the chest. Peanut is proud of Elephant, but he is nervous, so they keep practicing. Elephant rides a unicycle, but Peanut tells him his next trick is juggling rings on top of the ball. He then does so, but forgets which trick comes next, so Peanut tells him that it's time to practice doing stunts on the high-wire. Peanut then announces the high-wire act, but she shouts very, very, very, LOUDLY that she loses her voice! Peanut tells Elephant what to do, but when it comes time for the grand finale, Elephant is still afraid, but wants to continue doing the high-wire act anyway. Peanut struggles to announce the act, because she can't shout loud enough, which makes Elephant mess up.

At Marina's house, Marina and Whale decide to make the place look nice for their big boat trip with Rosy and Jewel. When she untwists the sail, the boat sails away!

At Rosy's house, Rosy is making a checklist for everything she needs for her boat trip with Jewel and Marina when suddenly Peanut comes in. She explains that she lost her voice and Rosy tells her to sip the tea and gargle the saltwater. She continues to do so until she accidentally swallows saltwater, and she leaves.

Peanut sulks back to her house when she hears Jewel announcing a fashion show in which Cat is the model. Cat is styling many different ensembles so Jewel knows which one to take for her boat trip with Marina and Rosy. Cat styles a sailor's uniform and Jewel asks Peanut what she likes, but Peanut can't speak. She hoarsely says she lost her voice, and Jewel feels empathy for her, explaining that Peanut's voice is one of her special traits, as is Jewel's tiaras. Peanut borrows her bullhorn, and when she leaves, it is now Jewel's turn to decide which outfits to take to the boat trip, and she decides to take ALL her dresses.

Whale is out in the sea, trying to grab the rope on Marina's boat, when he does do, he takes it back to the dock.

At Peanut's circus tent, because of Peanut's hoarse voice, she can't announce the acts correctly, and Elephant messes up. Since the bullhorn doesn't work, Peanut will have to ask someone else to be the ringmaster.

Whale brings the boat back to the dock, and Marina asks him to tie the rope into a knot. Unfortunately, Whale does not know how to tie a bowtie knot, a slipper knot, a crazy eight knot, or a double bubble knot, so she decides to teach him.

Peanut asks Crumbs, but she isn't home. Then She asks Jewel, but Jewel isn't home either. Then she went to Pillow Featherbed's house and knocked on her door. When Pillow and Sheep answered the door, Peanut hoped she didn't wake her. Pillow said her midafternoon nap just ended and she don't start late afternoon nap for a few minutes. When Pillow asked Peanut what happend to her horse, she explained that she can't be ringmaster and coach Elephant for the show tonight and needs Pillow's help. But Pillow said she don't know how to face a crowd like Peanut does. Peanut says you just stand in front of them and Pillow says she gets stage fright when that happens. Peanut says that she'll train her to support her the whole time. Not wanting to disappoint Elephant, Pillow agrees to do it and Sheep wants to be in the act to.

Meanwhile, Marina was teaching Whale how to tie knots. Whale tried to do it just like Marina, but the knot was not tight enough and Marina offers to show him about tying knots from her book about it, Whale tied the knot and succeeded. Then Rosy and Jewel arrived with their stuff and Marina ask if the girls are going to bring all that stuff. Rosy says that her cart stays on the dock and she's only bringing the stuff on it and Jewel said that she like to have the perfect outfit for any occasion and told Marina that if she need her to pare down, just give her a list of social events on board the boat so she can choose the appropriate pieces. Marina agrees since her boat is not big, Suddenly, the knot got loose and the boat was floating away! Jewel saw the boat and thought it was smaller. Then she said that they should had bring swimsuits when they swim to the boat. When Marina saw her boat floating away, she panic. But luckily, Whale swim to the boat and tugged it back to the dock. Since she doesn't want Jewel and Rosy to wait, Marina said she'll tie the knot. The girls said that they don't mind waiting and given the size of the boat, Jewel can use the time to edit her wardrobe. She told Cat that they can safety cut the ball gown & satin trench coat . 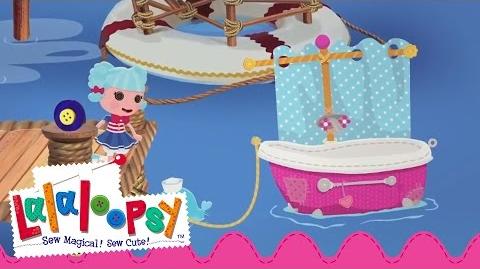 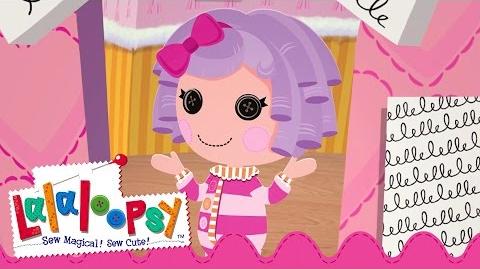