Up Up and Away

Up Up and Away

Dyna Might has lost her super goggles and must find them.

The episode starts in a comic book-styled cutscene as the sun appears. Parrot, scouting for shiny treasure, sees a pair of shiny rose-lensed goggles on her bedroom's windows and takes it. When Dyna wakes up, she can't find her super-powered goggles! Without them, she cannot use any powers, making her powerless. Raccoon finds a feather where she normally keeps her goggles, leading Dyna to believe a bird took them.

Just then, Dot and Bird fly by in her airplane, and Dyna hopes Bird might have seen who took her goggles. She jumps out her window and chases after Dot, but the plane is too fast. In the distance, Dyna sees Pickles and gets the idea to borrow her skates. Using them, she zooms across Lalaloopsy Land, catches up to Dot, and hitches onto her plane. Dyna asks them if they saw who took her goggles, but they didn't. Dot offers her telescope to help her scout Lalaloopsy Land.

In the distance, she sees Parrot with her goggles and follows him. When Dyna and Raccoon get to the beach, they've lost sight of him. Dyna worries that she'll never have her superpowers again. Just then, Patch's shiny new mobile catches her eye. Her goggles are on it! Patch apologizes on Parrot's behalf and gives them back. But after hearing about her adventure, he tells her that maybe she didn't need her goggles to have superpowers after all. 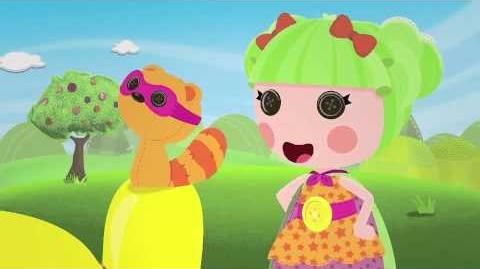 Lalaloopsy Webisode Up Up and Away
Español Русский
Community content is available under CC-BY-SA unless otherwise noted.
Advertisement